Hebrews 11 tells us that “faith is the assurance of things hoped for, the conviction of things not seen.”  It’s easy to say that you have faith because we all have hope, but do you truly believe that everything is possible for the one who believes?

17  “Teacher, I brought you my son, who is possessed by a spirit that has robbed him of speech. I asked your disciples to drive out the spirit, but they could not.” Jesus asked the boy’s father, “How long has he been like this?” “From childhood,” he answered. “It has often thrown him into fire or water to kill him. But if you can do anything, take pity on us and help us.” “If you can?” said Jesus. “Everything is possible for one who believes.” Immediately the boy’s father exclaimed, “I do believe, help me overcome my unbelief!”

I have a 10-year-old son named Payton who teaches me more about God than I could ever learn on my own. For instance, the other night I heard a small knock at my door followed by the innocent sound of my son’s voice asking me if he could sleep with me because he was having nightmares. After I had tucked him in, he asked if I could say a prayer that would allow him to have good dreams. So I prayed out loud, “God please be in Payton’s dreams so that he is not afraid of anything that might scare him, and make his dreams soo good that he wakes up  happy telling everyone how great his dreams were – AMEN.”

After reciting that prayer, Payton, somehow knowing that I was tired and just wanted to go to bed, looked me in the eyes and asked, “Daddy, did you believe that prayer when you said it?” My response: “No, Payton, I was just saying it so that you would feel better.” He whispered back, in a soft, innocent voice, “Say it again, but this time, close your eyes and believe it.”

So often I pray for the simple fact of making myself feel better, confronting my problems with a routine request, instead of believing that there isn’t a problem that is too small or too big for my God to fix.

I have personal training clients who look me straight in the eyes with concern on their face and doubt in their heart and ask me similar questions that my son asked me: Do you believe that I am going to lose this weight, feel better, look younger, or move without pain? Without hesitation, I answer yes, not because I simply want to tell them something that they want to hear, but because I truly believe that with the right training and nutrition program in place, anyone can achieve their fitness goals, whatever they might be.

My confidence comes from a history of client testimonials, before and after photos, and success stories, all of which speak of hard-earned results and accomplished goals that started off as dreams.

In my career as a trainer, I have seen high blood pressure decreased, stress levels reduced, pain eliminated, diabetes defeated, bodies transformed, confidence renewed, youth restored, and quality of life improved.  As much as I would like to take credit for my clients’ success, I cannot.  Motivation from a trainer cannot produce such results; the clients themselves have to believe in what they’re doing. Only true belief can defeat doubt, thus giving you the strength needed to overcome your hardships and obstacles.

When uncertainty begins, and insecurity and anxiety start to cloud your thoughts, turn to God and ask Him boldly to step into your situation. Receive His promise in your heart, release the doubt in your mind, and allow His will to be done in your life.

22 “Have faith in God,” Jesus answered. “Truly I tell you, if anyone says to this mountain, ‘Go, throw yourself into the sea,’ and does not doubt in their heart but believes that what they say will happen, it will be done for them.  Therefore I tell you, whatever you ask for in prayer, believe that you have received it, and it will be yours. 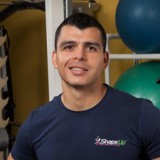 Christian Strength Coach is dedicated to helping people grow in their faith, with encouraging messages that focus on faith and fitness.